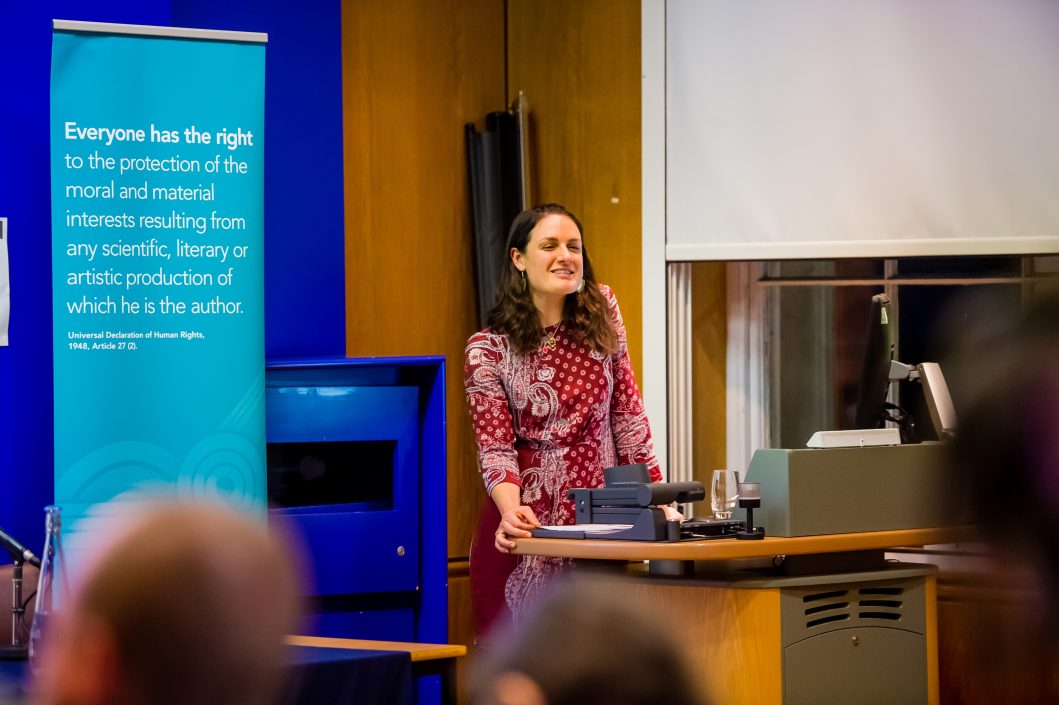 At an event hosted by King’s College London, the International Authors Forum (IAF) celebrates the power of writers to effect change around the globe.

On 10th October 2017, an extraordinarily diverse collection of authors came together for a ‘Postcards from the International Authors Forum’ event at King’s College London, organised by Katie Webb, King’s Alumna, as part of the college’s Arts and Humanities Festival. The event was supported by the UK’s Authors’ Licensing & Collecting Society (ALCS), Federazione Unitaria Italiana Scrittori (FUIS – the Italian Federation of Authors’ Associations) and the Centre for Life-Writing Research (which is based at King’s). Themed ‘World Service’, the evening event included talks, films and discussions providing ‘postcards’ of the diverse work that writers and visual artists carry out worldwide, and the work of the organisations who support them and their work. Contributions and speakers came from South Korea, Iraq, Italy, Israel, Sudan, South Africa and the Solomon Islands, all of whom offered insights into the role of authors in their countries, the issues they have to contend with, and the service they provide in different parts of the world, often in the face of considerable adversity. The event also celebrated the work and services of writer Maureen Duffy, co-founder and Honorary President of ALCS, who has been instrumental in IAF’s development, and whose archive is held at King’s College, where she is a Fellow.

The evening began with a short film, Another Way of Seeing, by Korean visual artist Oum Jeong Soon, accompanied by an exhibition of her photography. Created in collaboration with visually impaired students, it focuses on how they experience, respond to, and create art, raising the question of what it really means to ‘see’. The project echoed the values of IAF and its work in supporting greater accessibility to the arts, including its work with the World Intellectual Property Organization (WIPO) on the Marrakech Treaty, which aims to increase the number of books accessible to the visually impaired and blind.

The evening continued with a film, Yardena (‘Living Water’), by documentary maker Mouayad Sary accompanied by an exhibition of his photographs of Iraq. The film documents Iraq as one of the foundations of cultural civilisation, and portrays the recent conflicts there as a threat to the country’s cultural diversity. One fascinating example it shows is the Sabean Mandaeans, an Aramaic ethno-religious group whose gnostic ‘millennium’ culture was born of 1st century readings of the Torah. The ethnic cleansing practiced under Saddam Hussein’s regime led the majority of the Mandaeans to flee Iraq, and only a fraction still live in the country. The film highlights how important their continued presence in Iraq is, and explores the connections between the Mandaean religion and all the other main world religions and cultures through its symbolism, vocabulary and concepts of beauty, peace and marriage.

Katie Webb, who hosted the event, said “[Mouyad’s] work, alongside Oum’s, are examples of the importance of individual creative expression as practical action in the face of adversity and threats to cultural diversity, which is indeed under threat in so many ways, as Mouayad’s film illustrates.” The first official members of IAF, the Academic and Non-Fiction Authors’ Association of South Africa (ANFASA) provided the next ‘postcard’ with a pre-recorded discussion about the role authors have played in South Africa. Andries Oliphant, writer and lecturer, pointed out that authors played a crucial role in articulating South Africa’s societal problems and bringing the world’s attention to apartheid, at great risk to their personal safety. This is a major reason why artistic rights and human rights are now enshrined in the South African constitution. As a writer raised in South Africa’s post-democracy era, Lebogang Mashile, writer and poet, felt that women, and black women especially, are making huge strides in literature, particularly poetry, with innovative and multi-disciplinary skills which are both engaging many young people and helping to shape cultural identity, although she felt this progress is largely being overlooked by the literary mainstream. ANFASA’s treasurer, Monica Seeber, talked about the aims of the organisation to empower writers in their work, to strengthen their position, both from a financial and a professional point of view. She feels it is important that writers see their role as equally necessary as that of other professionals in society, echoing the sentiments of writers world-wide who want to tackle the idea that writing is a mere hobby.

It is authors who must step in and help to “present a different story about friendship, peace and humanity”.

From Sudan, Professor Ahmed El Safi, anaesthesiologist, writer and President of the Sudanese Writers Union, appeared in a pre-recorded video in which he discussed the Union’s work, and the difficulties it has overcome since its inception in 1985. The organisation works to protect the unique blend of culture in Sudan in the face of the suppression of ethnic, linguistic, cultural and religious diversity by governments over the past 30 years. The Union’s non-partisan position has made it a target of aggression by the state, and it has twice been closed by its own Ministry of Culture. In 1989 it had its assets seized and was closed for 16 years, before being reinstated in 2005 after a long campaign. The Union was again closed down in 2015 and was eventually reinstated after 22 months of litigation, conducted with the help and support of the global writing community. Professor Ahmed El Safi thanked IAF for its support during this time, and said the Union would endeavour to support religious and cultural tolerance, which “would always prevail and triumph over aggression”.

Isreali writer Vered Cohen-Barzilay, who is the founder of the initiative Novel Rights, then gave an insightful talk on literature’s role in creating a cohesive and tolerant society. She described her own experiences in Isreal of ingrained discrimination as a Mizrahi Jew, who are often identifiable by their darker complexions, and frequently deemed uneducated and of a lower class. Growing up with no Mizrahi writers to draw on, Cohen-Barzilay turned to the work of black writers like Toni Morrison, whose writing about racial discrimination helped her navigate her own experiences of prejudice. More recently however, a number of Mizrahi writers such as Iris Eliya-Cohen have emerged to share their lives, culture and experiences, and are working together to open up conversations between the Mizrahi and Arab communities, thereby reconnecting people who were ‘divorced’ from each other in times of conflict. At a time where people in countries across the world are increasingly blaming minorities for societal problems, Cohen-Barzilay believes that it is authors who must step in and help to “present a different story about friendship, peace and humanity”.

“Authors are the weakest link in culture, even though without authors, there is no culture…”

The Solomon Islands Creative Writers Association (SICWA) was represented by Christine Kuper-Wini. The Association’s aim is to document the history and stories of the islands, which, as they have a largely oral culture, has only recently been done by anyone from the islands themselves. Kuper-Wini spoke of the tensions that arose in the late 1990s between Guales and Malaitans, the result of workers from different islands setting to work on plantations. Amid threats of violence, many fled back to their original islands, while some stayed to fight. The result was death and destruction, with families being torn apart. Christina cited the experience of Jasmine Nawala Waeafea, renowned writer in the Solomon Islands, and the founder and President of SICWA. She was inspired to write about her experiences of the conflict after the death of her cousin, and the resulting work is Talemaot: Solomon stories of peace and conflict, a collection of stories and poems about the lives of the Solomon Islanders, both humorous and tragic.

Ida Baucia then spoke of the work of FUIS in supporting writers. Ida is FUIS’s International Co-director. “Authors are the weakest link in culture, even though without authors, there is no culture,” she said.  She echoed ANFASA’s concerns that many people still believe writing is only a pursuit for pleasure, citing FUIS’s work to increase the profile of writers as a vital component in culture and society. Exchange of information is vital for the culture of the world, but there is no art without remuneration to the author, she added, mentioning also the writing residencies that FUIS is supporting. Open to writers abroad as well as at home, they aim to help forge international relations and increase knowledge-sharing.

The final presentation of the evening was given by Maureen Duffy, Honorary Chair of ALCS who explained that the decision to set up IAF in the first place resulted from her concern at the lack of representation for writers at WIPO. Representatives from film, music, publishing and even libraries were present, yet: “Nobody was representing those whose copyright it is.” She went on to explain why copyright is so fundamental to the author’s life – “Without it, we have no basis in law” – and endorsed the establishment of copyright in developing countries, because, she said, they are the societies which most need writers.

Watch the full film from ANFASA.

Last year IAF collaborated with Accessible Books Consortium to put together a guide for self-published writers who would like to increase the accessibility of their self-published work. The guide offers great insight into the needs of the visually impaired and those who are print disabled in accessing publications online. Access it here.