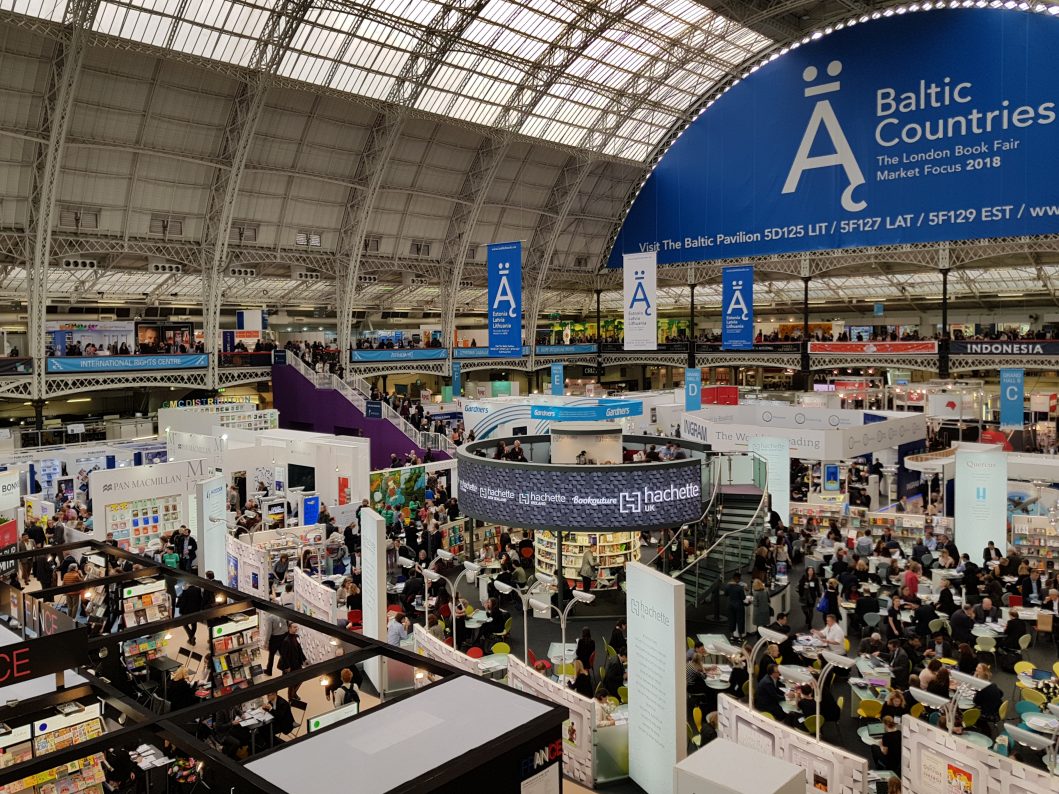 The IAF attended the London Book Fair 2018 where it met members and heard about a range of issues relevant to authors both in the UK and around the world.

Focus on the Baltic Countries

The LBF Market Focus for 2018 was the Baltic Countries. This was an opportunity for audiences to hear authors’ experiences of writing and growing up under the Soviet regime. Many related that the connection they felt with their native language sometimes felt more like home than their countries did.

In a talk entitled Interpreting Cultures: Russia, Europe and the West, four writers spoke about the relationship between language and culture and how this was essential in the development of their identities. Estonian writer Rein Raud spoke about how, with no sense of citizenship, the people of Estonia had made language their space and this has shaped their culture into something very language-based. This sentiment was echoed by Nora Ikstena in Transformations: Women’s Writing from the Edges who said it is “important to write in our own languages, as our language is our real home”. She advocated literature as a tool of healing, stating that “the more anxieties we have, the more stories we need”.

Krista Kaer gave a talk on the importance of translation in publishing. She spoke about her experiences of working in publishing in Estonia, saying it was getting harder to publish original fiction because so many people buy and read English books. Despite this, people are still keen to read both the English and Estonian versions of a book because of the complexity of an original English work. Krista revealed that towards the end of 1990, there was a huge demand for books that readers could not get under the Soviet regime, resulting in a surge of book sales in Estonia.

With more than 7,000 languages spoken today, translation can transport us to explore and understand other cultures and bring us together. In Aspirations and Anxieties: How Authors See Copyright Today translator Daniel Hahn discussed the idea that translators should not be invisible – they should be properly credited for the translation and be mentioned in any book reviews. We have often heard about how translators spread an author’s work to the world, and bring the world to readers in their country. You can read more about this on social media under the hashtag, #NameTheTranslator.

In A Bookish Brexit, speakers discussed how the UK has long enjoyed success in exporting the work of its authors and how this could be maintained with Brexit approaching. Speakers discussed how priorities for the UK Government included ensuring the copyright system continues to reward creators while protecting against piracy, the freedom to publish, the support for authors to speak out and encouraging people to read and write.

Former Estonian Prime Minister Andrus Ansip, currently Vice-President of the European Commission and European Commissioner for the Digital Single Market, talked about European copyright at the Charles Clark Memorial Lecture. Ansip stressed how important it was to find a way to modernise copyright law while maintaining protection for authors and maximising access to creativity with today’s copyright laws having been developed before digital platforms existed. As the internet has become the main channel for copyright-protected material, laws need to reflect new and emerging online uses. Ansip discussed how copyright reform would give publishers and authors the means to negotiate better with digital platforms so that rights holders can be in a stronger and fairer position to be paid when a platform puts their work online.

The Publishers Association session Accessible Publishing Strategies for Success covered the importance of accessible publishing for people with print disabilities. Speakers set out their hopes for a future where standard systems for publishing made it as easy as possible to expand the range of accessible books, and understanding the options for accessibility was as simple as checking the label, in the same way you can check the allergens on a bar of chocolate. DAISY presented their tools including ACE (Accessibility Checker for Epub) and SMART (Simple Manual Accessibility Report Tool) showing how these could enable content creators and publishers with no expertise in this area, to make their works accessible. The speakers urged attendees to visit the Inclusive Publishing hub for information. IAF has worked with the Accessible Books Consortium to create the Accessible eBook Guidelines for Self-Publishing Authors.

A major strand of LBF explored the need for diversity in the book industry. Rethinking Inclusivity: Ideas for Change addressed the idea that normalisation is key. Speaker Aimée Felone discussed how it is essential to have everyday stories published to ensure people understand that black writers can be writing for the same commercial reasons as other writers, and that this kind of representation is also essential for young black readers.

The International Board on Books for Young People (IBBY) presented a talk on the importance of writing children’s literature that includes themes of disability and chronic illness. Emily Davidson, a young ambassador for the organisation Inclusive Minds, argued that children are willing to read anything and that it seems to be publishers or parents who are worried about children not wanting to read books about disabilities. Speakers stressed that a disability does not have to be the main story; but that the balance between representing the character as just another person in society and recognising their disability was essential. It is also important to ensure disability is written as a spectrum, so that inclusive representation is as well-rounded in books as in society.

We also had the opportunity to listen to Kit de Waal, Jacqueline Wilson and Laura Bates, who spoke at the English PEN Literary Salon throughout the Book Fair. These influential women writers discussed their writing processes, as well as their respective genres. Their inspiring talks included subjects from everyday sexism to class issues.

The Society of Authors arranged Key Points to Watch Out For in Authors’ Contracts to give guidance to authors who are increasingly seeing their income squeezed by publishers, competition, and the growing issue of booksellers discounting books. The key points that an author should understand included the duration for which copyright was signed over in a contract; the range of formats allowed for exploitation (that is, while book and ebook formats are normally included, authors should be careful of giving away dramatisation rights in the same contract); and the languages and territories in which a book could be sold. Most importantly, the speakers discussed the factors that can affect the calculation of royalties: before signing any contract, authors should understand what royalty would apply to the majority of their sales, and what cut of this they should receive.

The Society of Authors works directly with authors to help them understand these issues.

The Society of Authors and other IAF members have also worked together to set out and campaign for Ten Principles of Fair Contracts for Authors.