For the past 14 years, the Graphic Artists Guild has been advocating for a small copyright claims tribunal for independent creators in the United States. This past year, the long campaign bore fruit: the CASE Act, or Copyright Alternative in Small-Claims Enforcement Act of 2019[1] was introduced into the House of Representatives as H.R. 2426 and into the Senate as S. 1273. A significant milestone was reached in October when H.R. 2426 passed the House by an overwhelming majority – 410 to 6. Despite wide bipartisan support in the Senate, S. 1273 has been stalled by opposition from only one Senator.

Advocating for legislation on behalf of graphic artists is a one-sided battle and we’re outmatched by large corporate interests. Legislation to create a small copyright tribunal has been introduced three time previously in Congress and each time has failed to progress, in large part because of opposition by the well-heeled tech sector. However, visual artist associations (including IAF member ASMP), joined forces as an informal Coalition of Visual Artists. The Coalition has given visual artists in the United States a much greater presence on Capitol Hill and before the Copyright Office. A larger force developed to support The CASE Act as a broad range of creators’ organizations, as well as the American Bar Association and the Copyright Alliance, joined forces to coordinate efforts.

After a long summer of coordinated activity, the success of the CASE Act in the House was a sweet victory. The Senate version of the Bill had a promising start – in July, the Senate Judiciary Committee passed the Bill to the full Senate unanimously. We had high hopes that the S. 1273 would come to a vote by the full Senate before the end of year (and, crucially, before that body is tied up with the impeachment trial of President Trump). However, a block placed by Senator Ron Wyden in early November has become an insurmountable obstacle.

Proponents of the CASE Act have met several times with Senator Wyden’s staff in the hope of addressing his concerns. However, as Copyright Alliance CEO Keith Kupferschmid reported to Billboard, negotiations have been backsliding as Senator Wyden’s office keeps changing the concerns they want addressed. It’s a situation Kupferschmid describes as a hostage negotiation. Senator Wyden’s stated concerns are aligned with those of groups traditionally opposed to copyright reform, such as EFF and Public Knowledge.

The impasse has left the creators’ organizations considering what steps we can take to break the stalemate. We’ll continue to meet on Capitol Hill with Senate staff. We’ll also continue to activate our grassroots efforts among our members and supporters, as well as put out information on the Bill, countering the disingenuous misinformation that is being published. S. 1273 will need to be passed by the end of 2020 in order to be written into law; on Capitol Hill, 12 months can pass very quickly.

[1] See Authors Guild Cheryl Davis’ update on the CASE Act for a description of how the legislation will work. 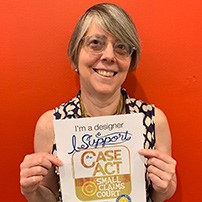 Rebecca Blake is the Advocacy Liaison for the Graphic Artists Guild, a trade association in the United States representing the interests of illustrators and designers across all disciplines. For over 50 years, the Guild has been committed to improving conditions for all creators of graphic art and raising the standards for the entire industry.